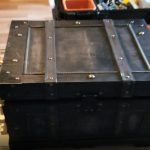 The Shock Box was a project that I concocted up after our family drew names for Christmas 2019. I have a history of giving rather devious gifts at Christmas time:

So I felt that this year I needed to do one better. I asked several family members for ideas including the recipient’s sister. She suggested the wonderful idea of the gift electrocuting him in some way, she “wanted it to hurt.” Thus, the Shock Box was born.

The original idea of the shock box was to make it something like a puzzle box. Each side of the box would have 6 buttons and if the 2 correct buttons were held at the same time, the box would open and the present would lay inside. While it was a fun idea and was cool from an electronics standpoint, it didn’t really satisfy the sister’s request of it hurting. So to take it up a notch, the other 10 buttons would be wired into a voltage discharge device that would release about +-1800v (after the resistance of the metal), releasing a shock through baling wires running along the top and bottom of each button row.

The design of the box was fairly simple. I used some past tinkering ideas to bring it all together in less than a week. Note, the items and links are more of just a reference for you – any variant of these items should do the trick.

The code for the microcontroller was relatively straightforward to the program. The only requirements I had were: